Western Highway. Save the trees – yes! “Alternative,” damaging route – no!

Stunning remnant roadside vegetation on the Western Highway near Mt Langi Ghiran will be destroyed if the local residents’ campaign is successful. They are trying to save trees on their farms, a perfectly acceptable aim.

Worryingly, residents are also calling for a so called “alternative” route that could only lead to the loss of the continuous, very high conservation value roadsides at the foothills of the mountain (a State Park), over more than a 6 km stretch. That must not happen. The roadsides extend the vegetation from the mount which is essential for maintaining a vibrant habitat. The roadsides are home to a large population of Sugar Gliders – and are replete with other animals, birds, insects and reptiles.

The Latrobe Valley Sustainability Group is protesting VicRoads’ proposal to remove 90 Endangered Strzelecki Gums plus acacias and wattles (including 24 old and very old trees) as part of a road safety project on the Tyers/Traralgon Road in the Latrobe Valley. Latrobe City only has 23% remaining native vegetation.

END_OF_DOCUMENT_TOKEN_TO_BE_REPLACED

Posted on September 2, 2016 by helentrees

It would take St Kilda Road (and Domain Parklands) at least a generation to recover from Melbourne Metro Rail construction, as new trees planted to replace those destroyed will not mature for many, many decades. Very Third World! The trees should be saved and any construction works forced to accommodate them.

END_OF_DOCUMENT_TOKEN_TO_BE_REPLACED

A prominent, highly visible fence on Flemington Rd has been painted with a plea to the Premier Daniel Andrews.

The sign also refers to this blog site – SaveRoadsideTrees.com. It’s putting the government on notice that the unprecedented attack on the environment by major projects in both city and country will have consequences.

END_OF_DOCUMENT_TOKEN_TO_BE_REPLACED

Many Melbourne groups, including the Friends of  Moonee Ponds Creek , the National Trust (which has listed the tree) and the Yarra Campaign for Action on Transport mourn the destruction of an  iconic 92 year old Lemon-scented Gum, and 5-6 others in Parkville. The combined might of the State Government, Vic Roads and Transurban have joined forces to demolish a much loved living treasure. Large old trees such as these are invaluable in built-up inner city areas, but their many benefits go unrecognised by money-driven authorities such as the three just mentioned.  Assigning a monetary value to all our trees could be a solution. 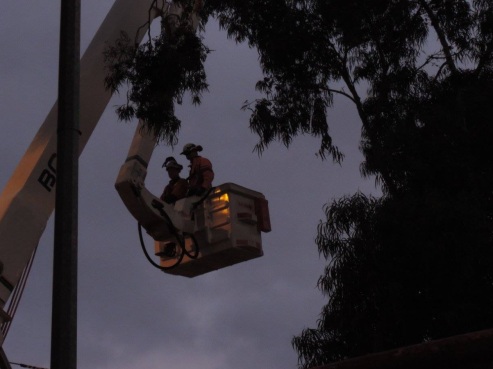 END_OF_DOCUMENT_TOKEN_TO_BE_REPLACED

Scenic Route to the Grampians from Ararat to be less scenic 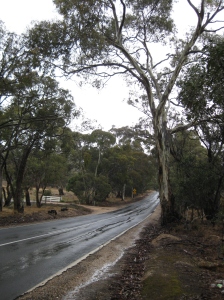 Many motorists visiting Halls Gap in the Grampians prefer to take the scenic route. (They visit the Grampians because they happen to like its natural beauty – so they like beautiful tree-lined roadsides as well).  One such road takes them via Cathcart and Moyston from Ararat. There are often people parked at the Cathcart picnic spot – where there is a shed, toilets and a picnic table. (Plus tennis courts – for the locals). It is very picturesque, and now also gives some respite to travellers from the east who have confronted the shock of the recent Western Highway tree losses.

Ararat Rural City Council, however, voted last year to allow VicRoads to remove many significant Yellow Box, Yellow Gums and other beautiful specimens of eucalypts along this route. One Ararat councillor, Fay Hulls, remarked that if she hadn’t voted in favour of the tree removals then she would have felt personally responsible for anyone having an accident in the area subsequently. (!) Her response is probably testament to the effective PR she and other councillors had been subjected to.

END_OF_DOCUMENT_TOKEN_TO_BE_REPLACED

This story appeared in The Age on November 16, 2015, journalist is Adam Carey.

It has been called “the most dangerous intersection anywhere in Victoria” by a former premier, a black spot 20 minutes south of Bendigo on the Calder Highway that has seen six serious crashes, two of them fatal, in the past six years.

There is hope the death of a 30-year old man last year will be the last at Ravenswood, with work beginning this month on the construction of an $86 million circular interchange unique to Victoria that will make the intersection much safer.